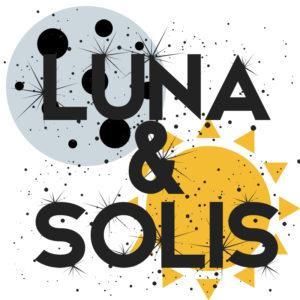 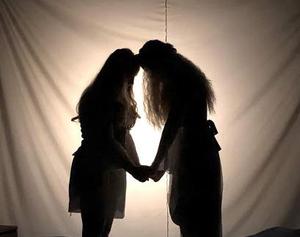 A magical premise, a folksy score, fanciful costumes, and an imaginative set make for a whimsical night of wonder in Brelby Theatre Company's Luna & Solis. Created entirely by members of the Brelby Theatre Company, this world premiere showcases a wide breadth of local talent. It's a delightful experience perfectly suited for the space that boasts a broad array of talents in shadow work, puppetry, and creativity on all levels.

Written by Brian Maticic, Luna & Solis centers around a tale of two towns and the growing tension between them. A seedy figure spreads fear and discord between them, but the children of the town leaders dream of peace as they meet in secret. As an eclipse approaches, a common myth comes to life before their eyes: the sun and moon take corporeal form and the short eclipse is all the time they have to touch before the lovers must return to the sky. Naturally, something prevents that from happening, and both sets of lovers suffer great turmoil as they struggle to achieve balance once more.

The tale is original and moving, though the show can't quite seem to decide if it's a musical or a play. Several songs come into play in the second act, but the songs seem a bit out-of-place to an audience who's unprepared for them. The melodies are simple but suit the show well, especially when they are interwoven, and the overall score is a perfect complement to the script. The sung pieces would have more impact, however, if there were a few more songs in the first act as well. The final villain song is memorable, and the lovers' songs are solid and stay with you long after the production ends. A few moments of full cast narration disrupt the flow at times, but overall the oral storytelling style is refreshing and highly successful in the piece.

Each actor plays a multitude of roles, taking on various background roles when needed, and often times those short glimpses of side characters give the actors a chance to really play, much to the delight of the audience. Jen Gantwerker as Luna is the perfect embodiment of the moon, graceful and earnest in her performance of the title character and a delight in her side roles as well. Shelby Maticic is her perfect complement in Solis, vibrant and honest in her performance. Gantwerker and Maticic draw in the audience the instant they take the stage together. Jon Gradilla plays the wide-eyed lovesick Aaron. Gradilla has a charming presence on stage, instantly likable and endearing to the end. Kevin Fenderson as Dolo is significantly smarmy and delightfully devious, a villain the audience loves to hate. As his son, Dez, Clayton Caufman is a true comic standout. He, as others, plays multiple characters alongside Dez and is equally hilarious in every part he takes on, excelling both in comedic timing, physical comedy, and vocal characterization. The whole cast performs well, shifting in and out of various roles with ease.

Playwright and director Brian Maticic brings out the best in his script with little moments of humor when the audience least expects it, along with brilliant staging and creative direction. Scenic design by Brian Maticic and Sarah Bary is one of the stars of the show, using simple sail-like structures to function as the canvases for shadow-play and movable elements that help move the story from scene to scene at a quick pace. Lighting design by James Beneze, Clayton Caufman, and Tyler Miller tackles a challenge in trying to light a show that, narratively, takes place largely in the dark. Their lighting design tackles the challenge well, and transitions seamlessly between back-lighting for shadows and lighting the actors. Sound designers Helen Morris, Anabel Olguin, and John Perovich achieve a fanciful atmosphere that accents the show perfectly.

Costumes by John Gradilla and Shelby Maticic are a stand-out with beautiful shades of white, grey, and black in styles that evoke folk tales and folk music alike, flexible enough for swapping characters with simply a hat or a scarf, but defined enough to give personality to each main role. Hair and makeup designers Kevin Fenderson and Rebecca Ulbrich match the costumes' whimsy with simple elegance. Props by Jen Gantwerker, Shelby Huston, and Ian Rey Sausedo are delightful additions to the story. Glowing moonstones, fantastical dream wisps, and many more playful elements truly bring the tale to life and feel much like they could have been pulled straight from a Jim Henson set. Original music by Brian Maticic, Helen Morris, and Ben Cleaveland gives the production a beautiful cohesion, bringing together all of the creative elements in a way that elevates each one.

Though there is room for more refinement to the script and music, the production itself is a delight. Luna & Solis is folksy, fun, and a delightful fantasy. Brelby's team showcases a rich pool of creativity that reminds us just how magical theatre can be.

CLICK HERE for more information on this production, which runs through November 10
Print